We wanted to go to Vasentha’s village as soon as possible after our arrival here in India, but Sheshe, his widow was “out of station” . . . meaning she was gone, so we waited till this weekend. Friday was India’s Republic Day and was a holiday for students. We attended their flag raising program and then off to the village with Dr. Suresh and Nupi. 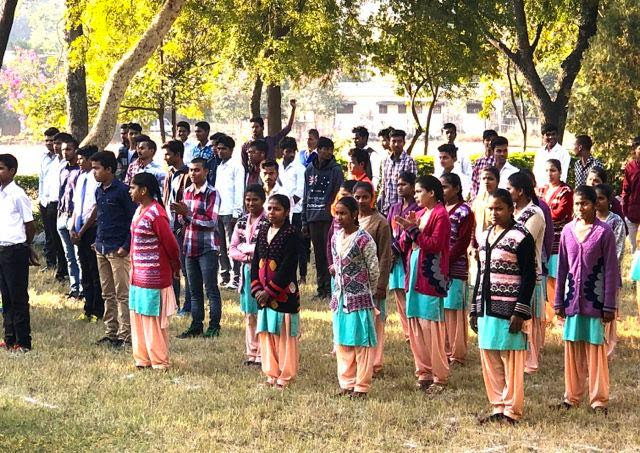 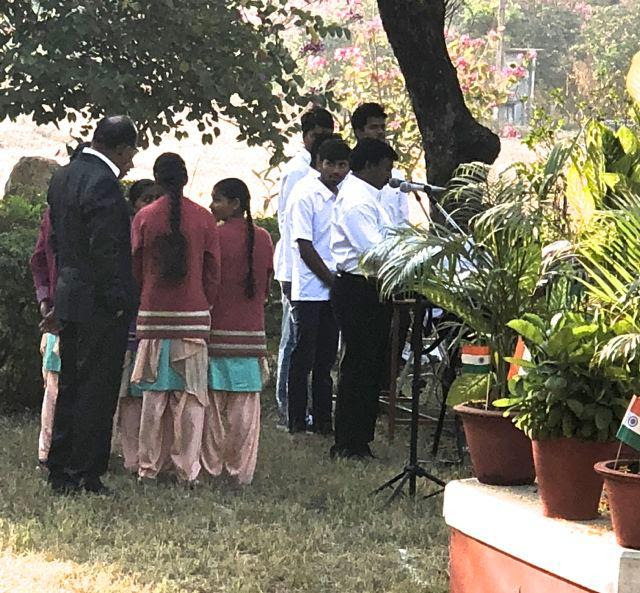 All the way out I bombarded Dr. Suresh with many questions about how the tribe will treat a widow and how she will live. He said because of their respect for Vasentha she is doing fine, and living in the family home. The road caused me to hold my breath and pray, but after stopping at the place where Vasentha was hit, 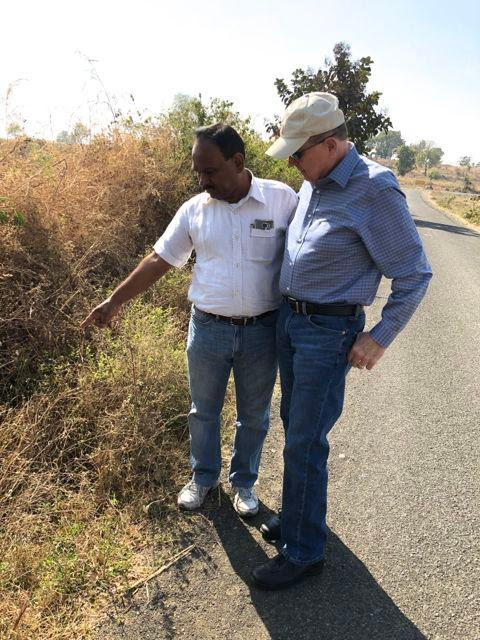 we made it to the village.
The pathway was still strewn with litter, 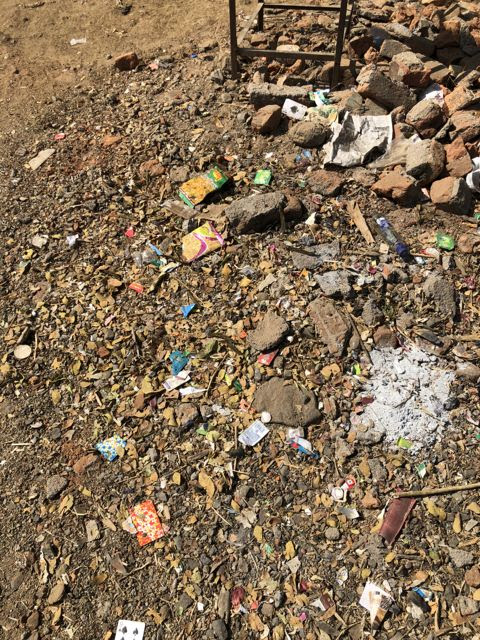 but there was a marked difference in the attitude of the villagers. Their greeting was exuberant and welcoming; unlike the first time we ever went. A very different village, due much in part to Vasentha’s influence for cleanliness and health care. 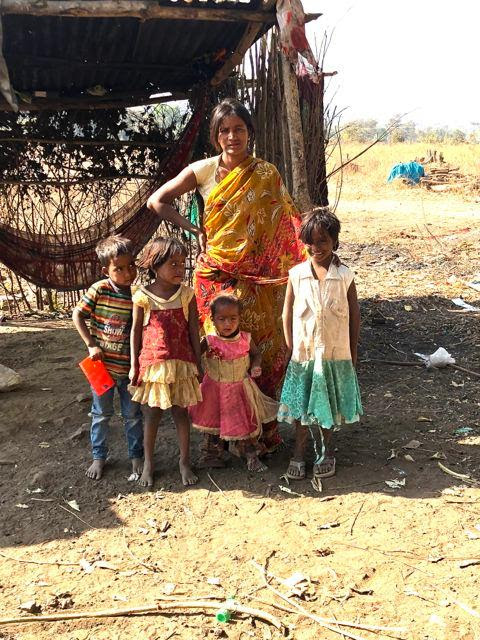 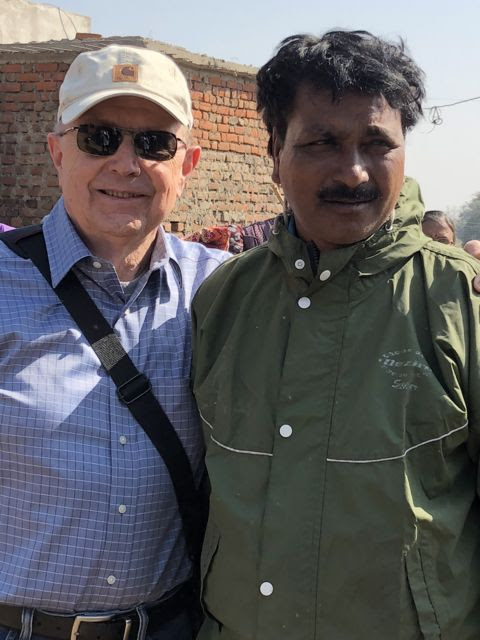 Sheshe was very reserved but allowed me to hug her, which brought on a flood of tears from both of us. 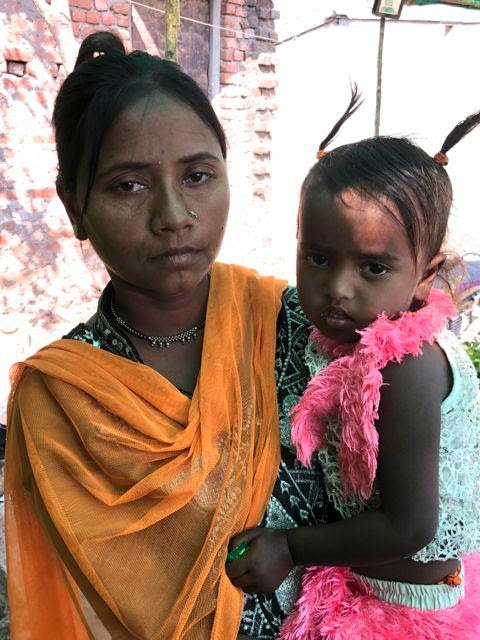 Vasentha’s mother grabbed me and said, “We spent much money, still he died.” I think she wanted me to know that they had done way beyond what was normal to save the life of a village member.
We really wanted to see Connor and Loren, two little namesakes in the village. 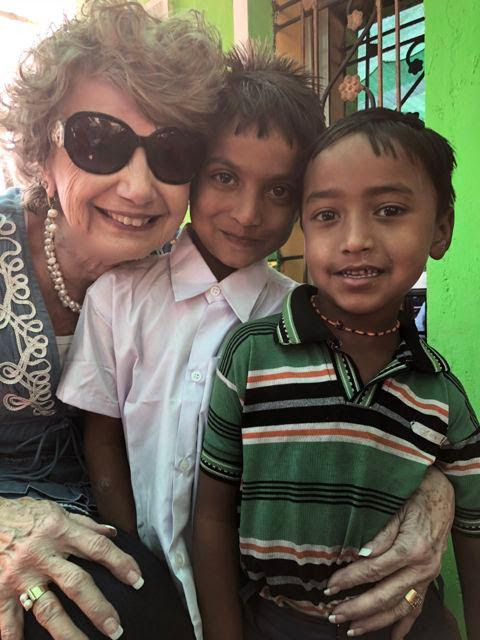 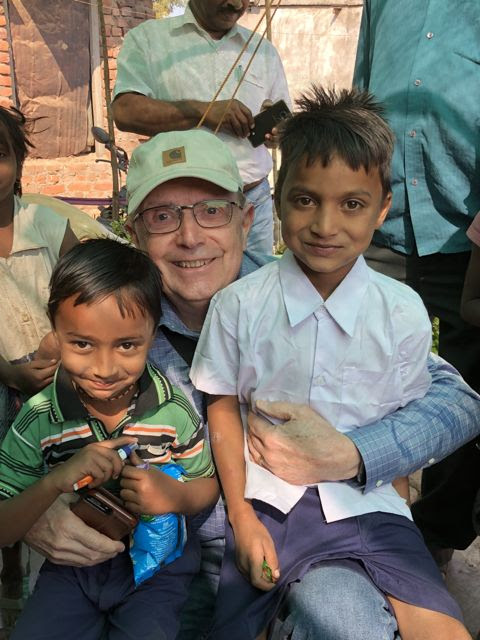 After all the greetings I sat Sheshe down and gave her my book about the life of her husband Vasentha. 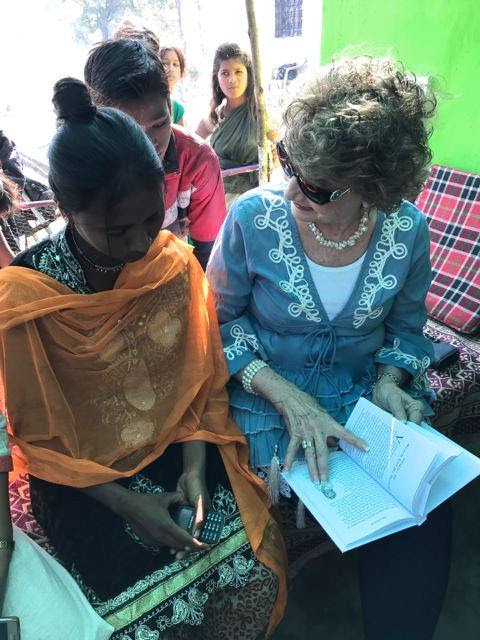 She cried and ran her hand up and down on the cover. Knowing she could not read it, I showed her some of the drawings. 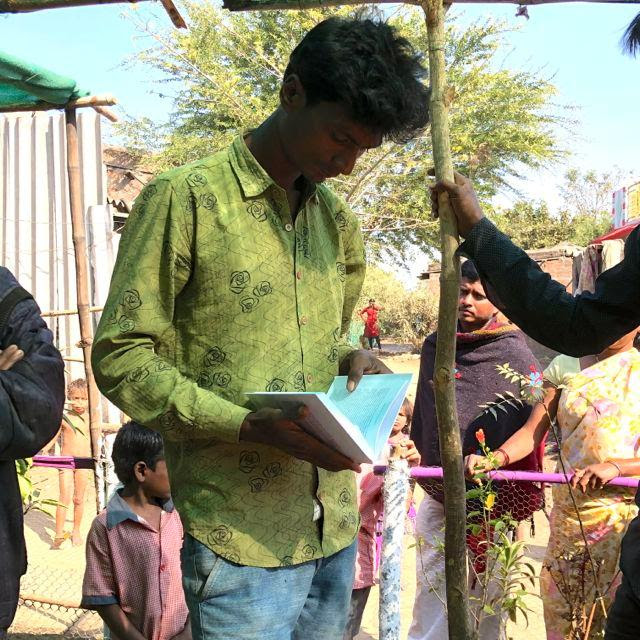 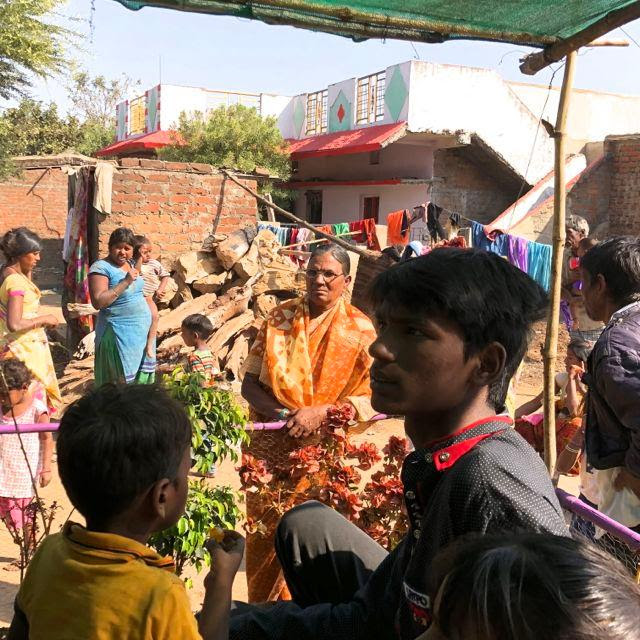 Vasentha’s brother then took control and allowed others to see the book with his guarded attention that they didn’t get it dirty. Many of them held it upside down not knowing how to read or having EVER handled a real book.
As is the custom in all of India there was a picture of Vasentha in the home in a place of honor. 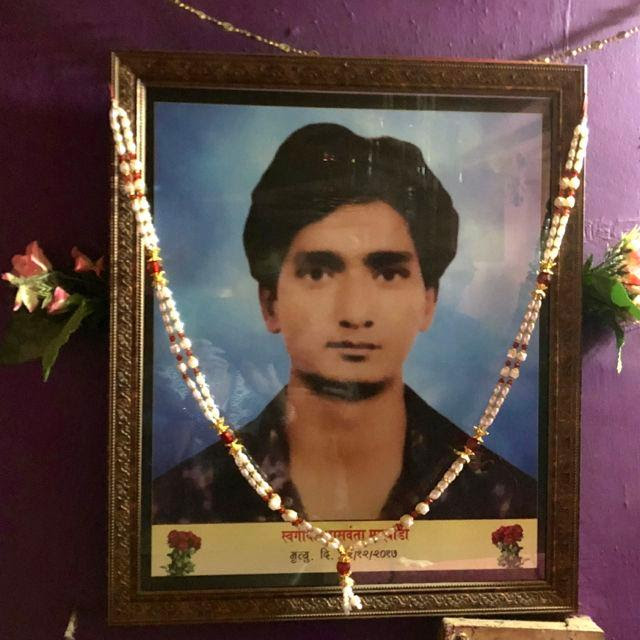 Loren then handed out the candy that they have come to expect from Papi Loren Sir. 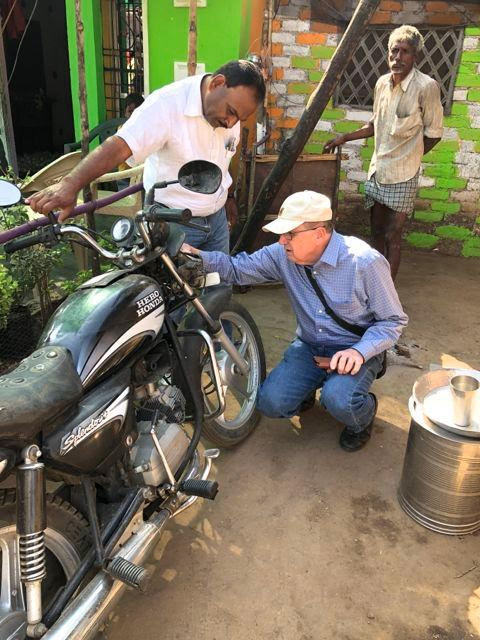 Also he wanted to examine the damaged motorcycle and see if it can be repaired. It looks like it can. As we were ready to leave we wanted to pray for Sheshe, Loren (6) and Jenny (2), so holding hands we formed a circle and the next thing we knew, the Chief was holding hands too. God is working on his heart. We don’t understand why God chose to take Vasentha home to heaven, but we are seeing some miraculous things happening. We need to just keep on praying.
As we were leaving we were handed two invitations. One to the Chief’s son’s first birthday celebration . . . he finally had a son after nine girls. Also there was an invitation to Vasentha’s sister’s wedding. So we will be visiting the village again for sure.
After leaving the village we trekked to Vasentha’s gravesite. I was blown away at how elaborate it was, and all done by the villagers. 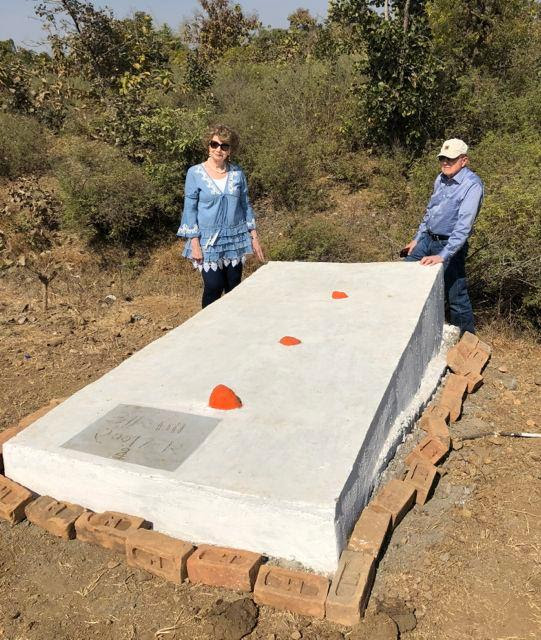 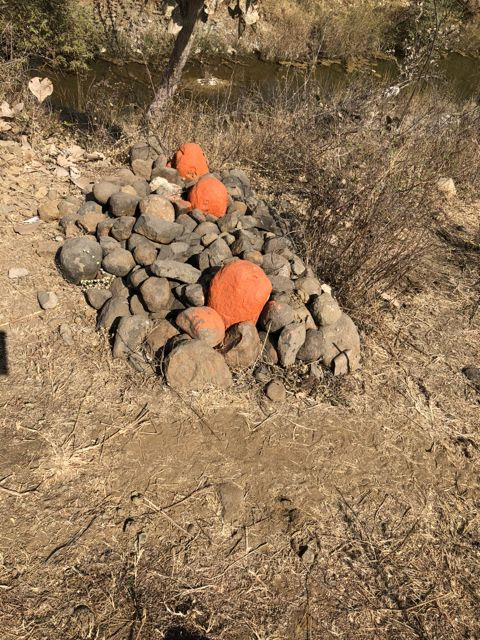 The three stones represent past, present and future of Vasentha’s influence on the village. The grave next to it copied that theme but was how it is normally done.
Before returning to Prakash we stopped for a lovely picnic in the orange grove of our farmer friend. 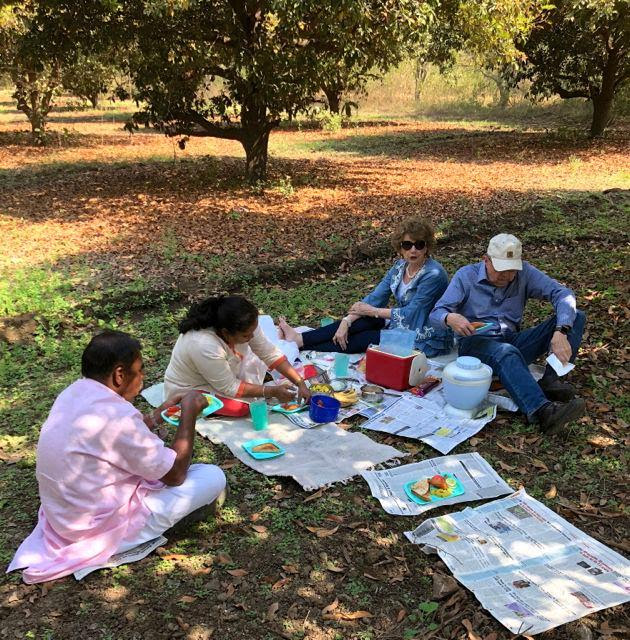