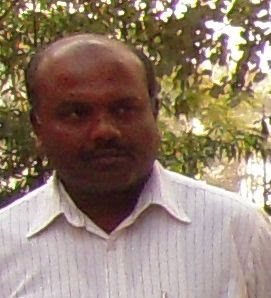 Nagesh our Business Manager has written these two updates. Just thought they were cute and will give you more information of Solomon’s progress. Thank you for all your support and prayers.

This is regarding Solomon. We thank God for today, Monday, foreign body from his eye is being removed. We took him to hospital at 12:30 pm they gave him drops for and medicine. He was little restless but he was given best counseling and also brotherly support. His wife and younger daughter were with him.

His operation lasted almost for three hours. We were sitting outside and watching on the television screen. His wife was crying but after talking with her she stopped crying. His operation was over at 9:30 pm. After his operation Doctor told me that tomorrow morning he will remove his bandage and then he can go home but he has to come for check up for three to four days if necessary. This he will let us know tomorrow morning. After one week he will have to visit Doctor. When I inquired about the possibility of eyesight coming back then he told me to hope for the best. He told me that he is trying his best. Now there is lot of blood in his eye and medicine will help him to recover soon.

After his operation Solomon had to spend one night in the hospital. His operation was major operation by Retina Specialists and there was lot of damage done by foreign body in the eye. He is asked to sleep on his chest with folded hands crossing each other and putting his four head on hands. While sitting he has to put down his face. He is asked to do this for three days. This helps to support retina. He could not sleep throughout the night because of terrible pain in his eye. Doctor had given him pain killer injection but after few hours he had unbearable pain. He was given pain killer tablets but it did not help at all. His pain was just like fish dying on the ground.  (I have no idea what this means. :-)))

He got discharge today morning. I paid the medicine bills and operation charges. I talked to doctor again he told that Solomon will have to come tomorrow for dressing. He also said that there is still lot of blood in the eye and medicine will help it. After eight days doctor will tell about eyesight. We drop him in his house and let me tell you that his wife was very grateful for what Prakash have done. Solomon gave me tight hug of thankfulness for being with him during his most terrible times. Padmakar was always there to pray for him.

His mother called me and she was crying and she told me to communicate her message of gratitude on her behalf.

Second number daughter seems to be feeling guilty for insisting her dad to buy second hand bicycle which Solomon had taken to repairing when this iron particle went in his eye. I talked to her and told her that it is not her fault so do not blame yourself.

His wife told me that after his first operation all of sudden he would get up and speak as if he is asking Prakash students to clean bathrooms properly. He would shout and say, “hey boy come and do this, or get me register.”

Tomorrow again he will go for dressing.