What would you give up to follow Christ? I cannot even imagine giving up a well-built brick house to live in a tiny not-so-well-made thatch shack. That is exactly what happened to Vasentha. Also making a stand for sobriety in a village where the total income is from the making of wine.

Dr. Suresh gives us some insight:

“Last month was full of activities and kept me busy. Especially many things happened in and around Vasentha’s village. Really the Holy Spirit is working on this village. Vasentha is doing good work.

First of all I would like to share with you that after my counseling Vasentha had stopped drinking wine. It was really hard to tell him but in the mean time he was admitted in the hospital. I made several visits to help him but then I decided to inform him about the dangerous effects of wine. And praise the Lord we got positive response and he has promised me that he will never drink.

Vasentha also tried to encourage his father but his father is not responding him but because of this he has been asked to separate from his family. I met the Chief and we tried to find another place for Vasentha. So most of his time was spent in building his new house. 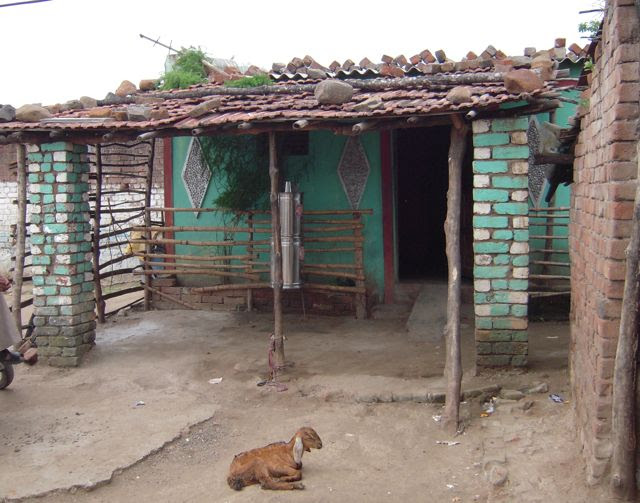 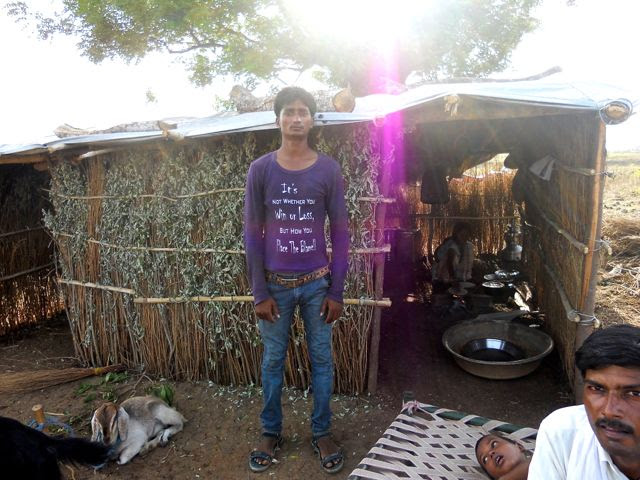 His children’s ministry is going very well. We also started one class at his old village. He is getting a good response there. But now Vasentha is facing transportation problems, as he doesn’t have any mean of transportation. Vasentha is praying for this.

We also had two vacation bible schools at Vasentha’s village and also in his old village. Along with the children some women also attended our VBS programme.” 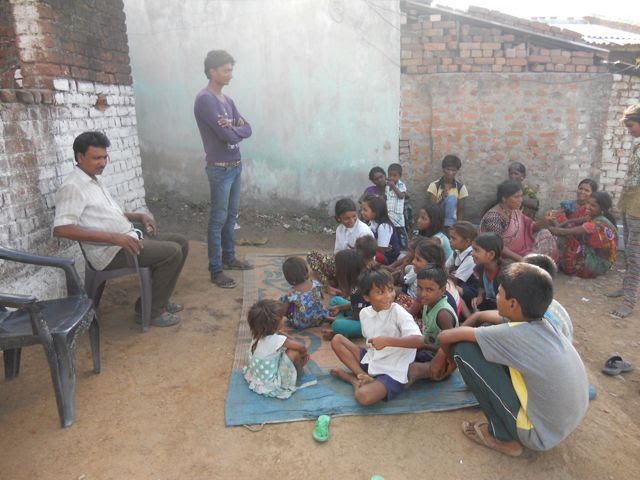 “This report is a little disturbing. I don’t fully understand why Vasentha and family had to move out of the house.

I thought that he had built this house for his parents to share with him. Am I mistaken?

Who asked him to move out? What roll did the Chief play in this?

Is the Chief upset over this? Has his brother taken over control of the house?

What is his mother’s reaction to all of this?

What about Shashi, is she happy to live in a stick/thatch hut?

What about when it rains? You can see right through the walls.

What has happened to the motorcycle that Vasentha was riding?

You need to help the people understand that to stop drinking is a health issue, not a Christian issue.

To stop drinking is not a requirement to becoming a Christian.

I have heard this in the churches that if they would stop smoking or drinking then they could become a Christian.

I am sorry to see and hear about this situation, but I am proud of Vasentha and his stand for Christ.”

“It is Vasentha’s decision to move out. As he stop doing wine making and helping his parents for the same, ultimately the load came on his brother so the two daughter in laws started quarreling each other. Then Vasentha thought that it is good to move out than further quarrel.

And this is their custom generally after marriage most of the married couple feel comfortable going out and stay their own. Chief gave him land for new place. He also find it is better to move out than further quarrel. Chief is not upset over this matter, as it is their family matter.

Yes his brother is living in house right now but still Vasentha holds equal right on house. Mother also think that it is good for them to stay away as she don’t want any quarrel in village.

Motor Cycle belongs to his father as he paid the seed money and paid all loan.

I met Sheshi and she is happy in her new house. She is concern about transportation thing as many times they have to go out of village for marketing, hospitals and of course Sunday School at his old village. 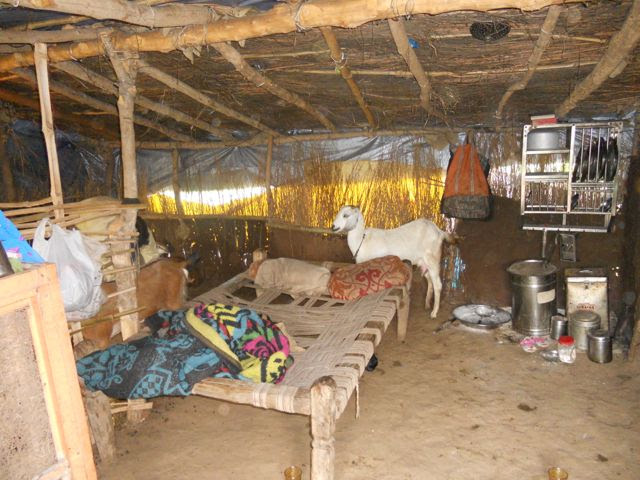 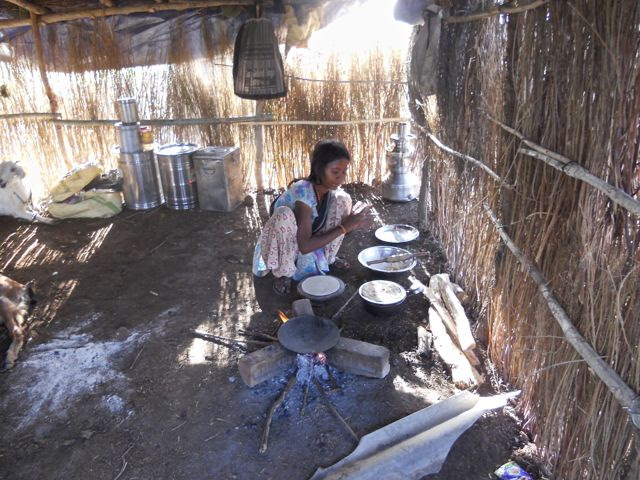 Yes that is a goat in the house.

This month was a little busy for me. I had been helping in vaccination program in an area and especially to our people whom we gifted goats. I felt joy seeing their progress in this. Vasentha has his goats with him. 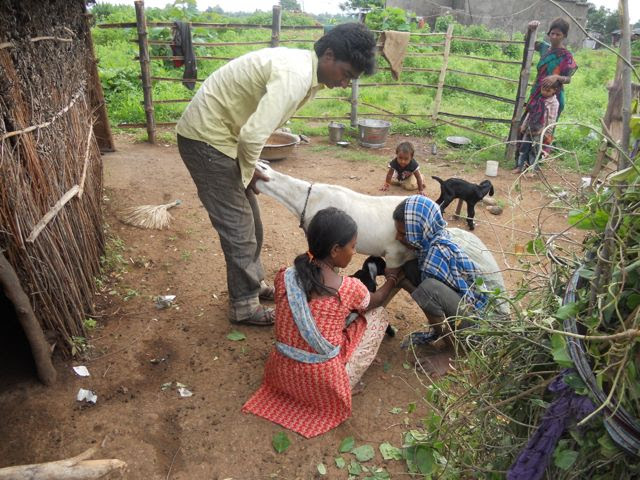 Especially it was hard for me to take out time and reach Vasentha for helping him in his new hut-house. It has been blown away twice by hard winds and water drips inside. I really felt helpless. But even in that condition we prayed and gave glory to God that at least Vasentha has something. Then we (meaning Nupi and Suresh) bought huge plastic cover to get his hut covered. It was great joy to help him. Now they are out of danger and safe in rainy days. 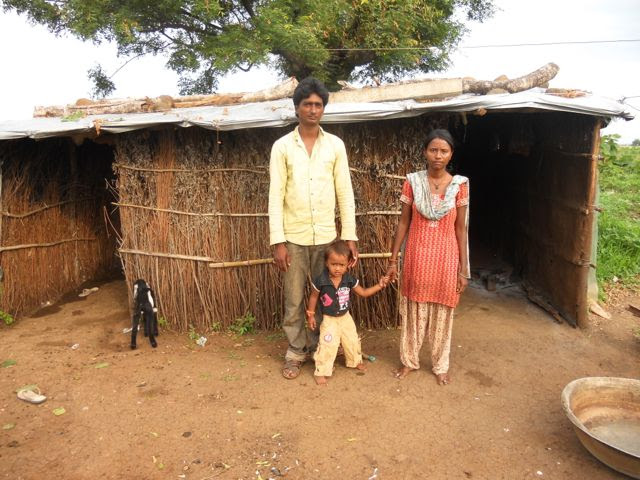 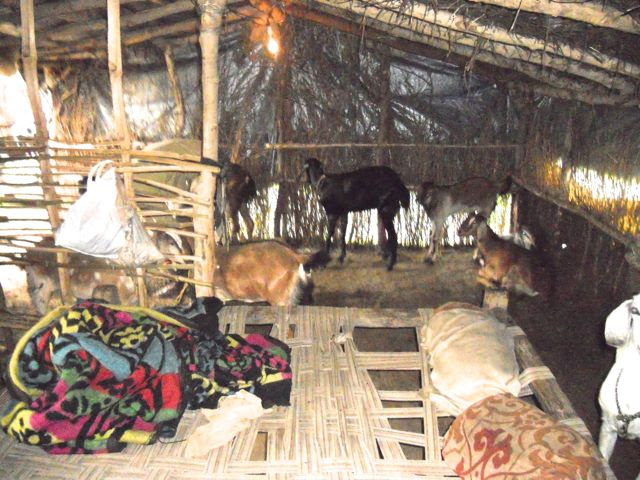 Every Sunday Vasentha is regularly taking Sunday schools. Many parents are sending their children. 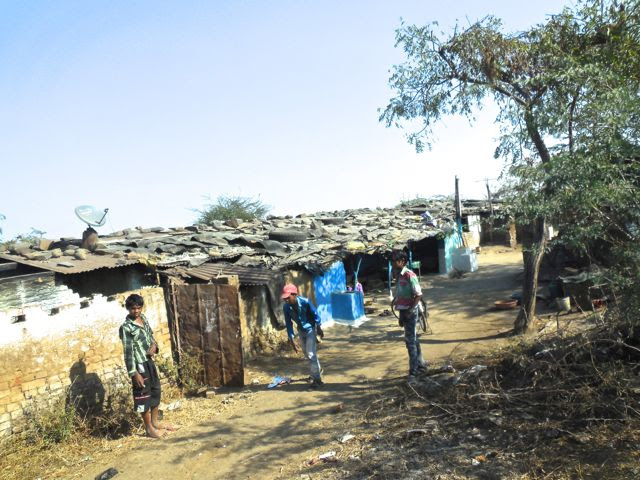 We also started one class at his old village. Praise God for his small work in this village.”

Hebrew 6: 10 ” God is not unjust, he will not forget your work and the love you have shown Him as you have helped His people and continue to help them.”

Vasentha is assisting Dr. Suresh in many areas of ministry. Dr. Suresh is funding Vasentha’s “honorarium” from his own salary while praying for funds to cover this expense. There is a huge need for another motorcycle. Our thoughts are that if…no…when funds come in we could replace Dr. Suresh’s motorcycle. Then service and let Vasentha use the older one. As you can see…many things to pray about.